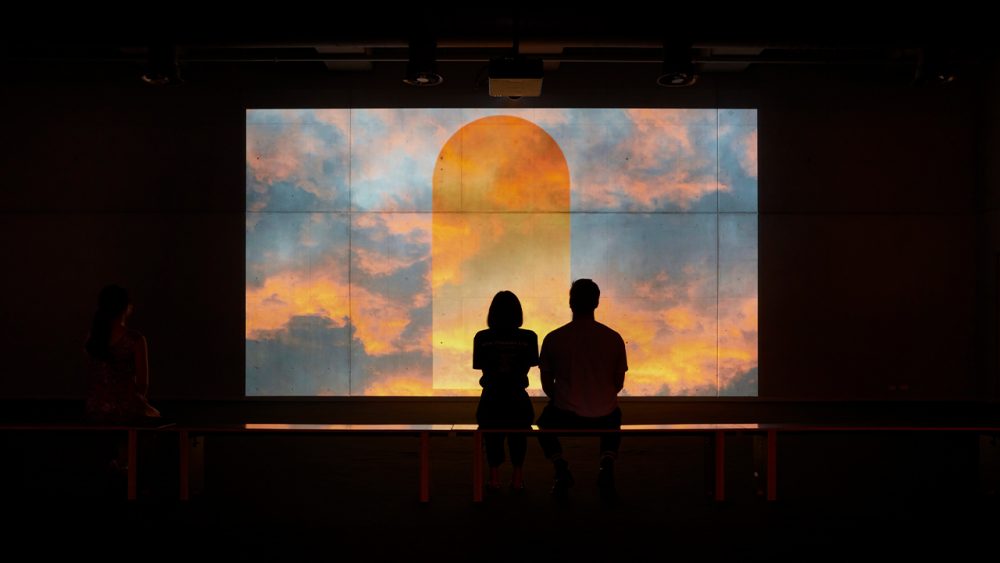 If you’ve ever seen a creature looming in tufts of cloud or eerie faces whorled in wood grain, then you’ve experienced pareidolia, the mind’s impulse to glean sense from arbitrary textures. In 2013, a Berlin-based design studio gifted an algorithm the poetry of this human error: designers combined a Google Maps trove of satellite imagery with facial recognition software, spawning a globe-surveying robot that could find a face in hillsides or rocky mountains, nestled in crevices like some sleeping colossus. Droll enough, but there’s something suspect in this move to make our world so legible, asking a machine to turn Earth’s topography into a mirror of human detail. Predictable, I’d say, this anthropocentric need to set the terms of recognition: linear perspective cast space as something to be mastered; science reified the eye as the apex of knowing, devoted itself to making visible the cosmic and microscopic alike. So it’s no surprise that colonial enterprise and industrial development have always relied on technologies of visualising nature. See any map that voids a land’s native history with a new name, any painting by early white settlers that distorts Aboriginal territory into European pastoralia. To master a new environment, turn it into a painting, a map, a satellite image. Put a frame around it and claim it as knowledge.

In the post-Enlightenment West, knowledge of the natural world has largely been produced for extractive and possessive ends. States and regions are circumscribed by political power, land transformed into property and profit by law. Even activist attempts to stay the vicious momentum of ecocide, like Kawsak Sacha, the “Living Forest” project that seeks special recognition of the Amazonian rainforest, are forced to appeal to legal fictions. Such frameworks instilled by centuries of instrumentalist and expansionist thinking have distorted our relational grammar with the natural world, so I’m struggling, even now, with the stuffy prescriptions of this syntax. There is that familiar expression of the environment as something we can be in or on, of or from; when mediated by artistic or scientific practices, it can become something to think about. Even the corrective language of “sustainability” in climate change policy tends to cite the shared horizon of our future as a point of urgency, as if the future of this planet is something we can (and already) own. Any kind of critical engagement with the Anthropocene must also challenge these long-held prepositions, and the works in Prototype’s Radical Ecologies do exactly that, nudging us into provocative elsewheres to ask: what kinds of aesthetic practices and languages could be possible if we saw the environment as something to think and be with?

The two films in Radical Ecologies that centre human engagement with the natural world—Hannah Brontë’s The Sweet Suits and Tiyan Baker’s Tarun—both draw from a vital sense of being with their environments. In The Sweet Suits, we are pulled into a soft dream of principled refusal and joyous languor. The sole human figure is swathed in a pastel pink costume that echoes the natural extravagance surrounding him: fabric rounded like a conch shell’s secret curvature, layered in gossamer folds like the rose petals he has all the time to smell. There’s only room for gentle luxuriance outside the demands of regimented productivity, an openness borne of a slow unfurling. A similar vulnerability marks Baker’s Tarun, which documents her journey back to her mother’s village in Sarawak, Malaysia, home to the indigenous Bidayǔh people. Tarun is a complex act of autoethnography, shadowed by Baker’s awareness of her transgressions as an Australian-born Bidayǔh woman. It’s not only what Baker learns—about Bidayǔh culture, the textures and forces of the jungle, the language itself—but her process of learning as a constellation of the senses. Being in the jungle is listening to it, thinking with and through the vibrant phenomena that make it a place and a home.

Another work in Radical Ecologies, Amelia Hine’s Metamorphosis #1, uses animated collage to express this kind of environmental entanglement. We open in a trompe l’oeil dimension, where hand-cut images crowd the screen as though papered to it, the tactility of their dense layers made bolder by a synesthetic soundscape of ambiguous stickiness and vague buzzing. These images seem to archive some matrix of human endeavour and nature’s marginalia: there are insects and rock forms, but also urban high-rises and a sinister bloom of fire not unlike a mushroom cloud. If the process of collage draws attention to the displacement of its materials, then Hine’s rearrangement has drawn us towards a kind of “thingness,” the presence of nonhuman materiality surrounding us. It’s part of a recent turn in ecocriticism that has moved beyond even interspecies entanglements, welcoming non-sentient things to the conceptual fold. Political theorist Jane Bennett has written on the peculiar vitality of these materials, with which we exist in collaborative and cooperative arrangements. There’s no room for limiting subject-object binaries here, no Man vs. Nature partitioning of agency as something exclusively human. In these “assemblages,” as Bennett dubs them, eclectic elements can generate a kind of vibrant force.

What would it mean to recognise the scales of other lifetimes? I’m reminded of something the plant ecologist, Robin Wall Kimmerer, once wrote about a moss-draped cavern she chanced across, an encounter recalled in the shimmering dimensions of a dream: “There is an ancient conversation going on between mosses and rocks, poetry to be sure. About light and shadow and the drift of continents.” What thrills is that evocation of a dialogue that has never needed us, made secret to most by a millennia of wilful dismissal. In that moment, Kimmerer reverses the unilateral force of the human look: “Held in the gaze of the rocks, my presence is acknowledged.”

A similar inversion takes place in Sam Smith’s Lithic Coda, where rockforms float, spin, and glide, if not verifiably sentient then at least perceptibly animate beside a human interlocutor. The blink of human life is set against the oldest presence in our world—Smith’s “coda” could well be a lithic prologue, too. As an offscreen voice lists a taxonomy of prehistoric marine forms, mostly extinct—cystiphyllum, pachypora, ischadites—their names are read out low and soft like incantations, fossils not excavated but conjured from a deep past. In Robert Nugent’s Picnic Places, it’s the present that has been made strange and distanced, spun into something like a travelogue assembled at the end of the world, and filled with static desertscapes that show picnic benches, tables, and chairs—vestigial structures of human sociality. But as we move through shots of native flora and fauna and into Kulpi Tjuntinya, a cave that briefly sheltered a white settler prospecting for gold, we are reminded that colonialism already ended so many worlds. Nugent uses the defamiliarising tricks of the dystopian genre: take what we recognise of our time, sheath it in mysteries, and hope that we detour to the truth of our present with new eyes.

I’m inclined to think of a labyrinth here, experienced as a series of necessary detours: the seeming opacity of experimental film in a series like Radical Ecologies is the perfect foil to a planet made intelligible and therefore profitable. It’s a challenge to the imagination that blooms in Jodie Whalen’s A new and different sun, a luminous vision of abstract horizons and clouds made pink and violet by the slanted light of dusk. Whalen’s work suggests a surrender to the sublime that could bring, in lieu of awestruck terror, the bliss of shifting boundlessness. I have known these skies, been stilled by their chromatic miracles into a gentler version of myself. I have also been moved to steal their impressions and revisit them, locked into the tiny grids of my phone’s camera roll. This is what the frame can do: offer encounters with the natural world that open us up to it, instead of closing it off as knowledge or commodity. It can ask us to care about what we cannot know, to be stunned by the gift of a heartrending dusk into something like love.

This text was commissioned by Prototype and presented as part of No Show at Carriageworks.